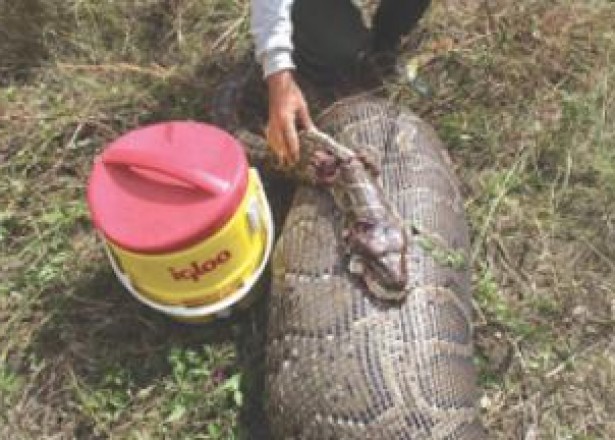 FLORIDA - A Burmese python slithering through the Everglades proved that her eyes weren't bigger than her stomach, swallowing intact a 76-pound deer.
At 15.65 feet, the python isn't the largest on record. But the size of her prey both impresses and concerns state and federal wildlife scientists and land managers trying to control the non-native species."They are large exotic animals that are not naturally from this area," said Randy Smith, spokesperson for the South Florida Water Management District. "The potential to wreak havoc on the natural Florida wildlife ... they don't have true enemies."
Contractors spraying exotic vegetation Thursday came across the female python on an island about 20 miles from Everglades National Park, Smith told CNN Tuesday. It was dispatched, by protocol, with a single shotgun blast to the head.
A necropsy conducted by Everglades National Park wildlife biologists showed the python had a girth of 44.1 inches after devouring the adult female deer. The snake normally weighed 139 pounds.
Officials Tuesday said they are trying to determine the age and health of the deer.
"We see them on a regular basis," Smith said of pythons. "We've dispatched hundreds of these in the past few years."
The menu for Burmese, rock and African pythons includes rodents, birds or smaller snakes. In 2005, a python apparently busted its gut after it had consumed a 6-foot alligator.
Some of the snakes may have escaped enclosures after Hurricane Andrew's widespread destruction in 1992. But there's a more likely cause for the problem. "Obviously, some of these were pets," Smith said. When people realize they are going to grow up to be much larger than they expected, they often release the creatures into the wild.
That's the worst thing you can do, officials said. Management and park officials have tried trapping, but that's largely failed.