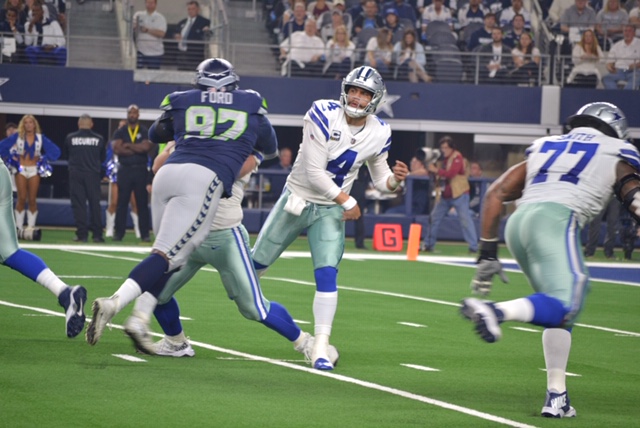 ARLINGTON, Texas – For those NFL fans that have never seen the outside of the Dallas Cowboy’s AT & T stadium in Texas, well you aren’t missing much. “Jerry’s World” as the fans call the stadium resembles any of the other mega stadiums you will find across the United States. Upon entering this mega stadium well that is when your jaw will surely hit the floor as “Jerry’s World” does not disappoint when it comes to opulence. Everything and I mean everything is larger, bigger and I’d begrudgingly admit is better than any other stadium that I’ve ever visited. From the overall food selections, to the number of deluxe lounges, to the overall shear volume of seating arrangements this stadium screams of being bigger than the rest.  On the topic of bigger – the massive tv screen located in the middle of the stadium is so large that it is nearly impossible to not focus in on the screen vs watching the action on the field. The overall feeling of just being inside “Jerry’s World” seemed like an experience unto itself.

When the gates finally opened for the massive Cowboy fan base waiting outside for the start of the playoff game between the Cowboys and the Seahawks they didn’t hesitate to come in. Instead of simply walking through the front doors these Cowboy fans were literally full on running into the stadium. Immediately there was chants in the air of “COWBOYS, COWBOYS” and “How about them Boys?” The excitement didn’t stop there as fans everywhere were sporting large Cowboy hats, Cowboy Jerseys, wearing flashy Cowboy boots while drinking up large quantities of beer. As if these spectacles weren’t enough for the senses the stadium came alive with dancing groups of both women and men, in Cowboys gear while in step with the stadium music, all the while inside of the audience walkways. It was really a site to behold. Then the real show started as the Dallas Cowboy Cheerleaders took the field – in perfect step while showing the rest of the NFL why they are considered the best. For the climax the Cowboy football team took the field amid a pyrotechnic display to bring us NFL fans back to earth on why we actually came to the stadium and that was to watch playoff football.

When comparing AT & T stadium to our own CenturyLink stadium in Seattle I was taken aback by the fact that even though CenturyLink is so much smaller it is definitely the louder of the two stadiums. The massive tv screen at AT & T while super impressive, it gave a feeling of disconnect to the players on the field. My eyes were constantly drawn to this massive screen along with the advertisements they endorsed. Another point of difference between the stadiums is locker rooms for the visiting teams. What extra room “Jerry’s World” give to their fans they definitely take away from the opposing teams as I’ve seen Jr. high school locker rooms bigger than what the Seahawks were given. The Seahawk press room for that matter felt more like a converted closet than a proper press room befitting such an outstanding stadium. Even with these few criticisms if I was given the chance go back to AT & T stadium I would definitely go for I now know what it is like to be in “Jerry’s World”.

I attended the January 5th NFC wild card game between the Seahawks and Cowboys as a neutral fan.  I left Dallas with greater respect and appreciation for the Seahawks.

Prior to the game, I walked each sideline.  The NFL sideline is a happening place, and AT&T stadium is a unique place.  Fashion ranged from tuxedos and cowboy boots to a man dressed as a Seahawk!  The players were having a blast, signing autographs and hanging out with family and friends.  It was a great place to be.  60 minutes prior to kick off, things changed.  Players were in the zone and the entire atmosphere and energy of the stadium changed; it was game time!

My highlight occurred during pre-game warmups while watching men of faith.  Several Seahawks knelt in the endzone in prayer, including the Griffin brothers, Shaquill and Shaquem.  The Griffins prayed together while embracing each other; I could feel the love they have for each other.  As a man of faith, as a brother, that moment moved me.  The national anthem, was played on a trumpet by an active duty service member while dozens of other service members held tightly to the Flag.  I’ve watched this version of the national anthem on the TV many times, but being there, field level, feet from the flag, it was different; it was real, raw, and emotional.

Once the game started, I did my best Pete Carroll impression by pacing the entire Seahawk sideline, looking for the best angle to view the action.  My focus on getting the perfect picture did not take me entirely from the game--I was able to interact with the players.  After a pass breakup, I congratulated Shquem Griffin and received a head nod and one of his infectious smiles—he is a genuinely happy person, even in the middle of a tough game.  After the Sebastian Janikowski injured his leg (later reported as a thigh injury), I watched punter Michael Dickson feverishly get ready to kick in case called upon; it was clear that he had a lot of work to do.  I watched as Pete Carroll popped veins in his neck while screaming at the referee for the timeout and an NFL official sheepishly attempted to corral Pete back to the coach’s box.  I also watched Pete as he high-fived Bobby Wagner after a big defensive stop.  Pete was as excited as my 5-year-old is on her way to Chuck-E-Cheese.  Pete is a kid, a 70-year-old kid.

After the game, the friendly atmosphere returned.  Players held a joint prayer, congratulated each other, and traded signed jerseys, as though they were children trading sports cards in their bedrooms.  Players that were locked onto one another 5 minutes before were friends, laughing, joking.  Shaquill’s infectious smile had returned—he’s a genuinely happy guy, even after a tough loss.  Players were taking selfies, and even did a couple of Facebook Live feeds for the fans.  While NFL personnel were running around trying to clean up, the players were enjoying the moment—their joy increased my joy.

At the press conference Pete Carroll, Tyler Lockett, Dough Baldwin, and Russell Wilson talked about adversity, growth, unity, and “becoming men.”  Each spoke of his sincere love for teammates and the Seahawks staff.  Each spoke of his desire to support every man in the locker room and to become a better man during the offseason. If nothing else, the hard end of the season brought one positive thing to this fan: respect for the Seahawk, the players, and the coaches.

Behind the camera, I missed much of the action—I had a job to do, and I wanted to do my best, but I didn’t miss the important parts of the game.  I did not see the touchdowns as clearly as I wanted, I didn’t clearly see a missed field goal, but I did observe the most important thing: the humanity of good men trying their best.  I give the players credit for trying and for being good men.  While I am a faithful 12 convert, being around the players brought me new appreciation for the Seahawks.
David Milne y Pete Serrano La Voz Reporters
lavoz@bmi.net