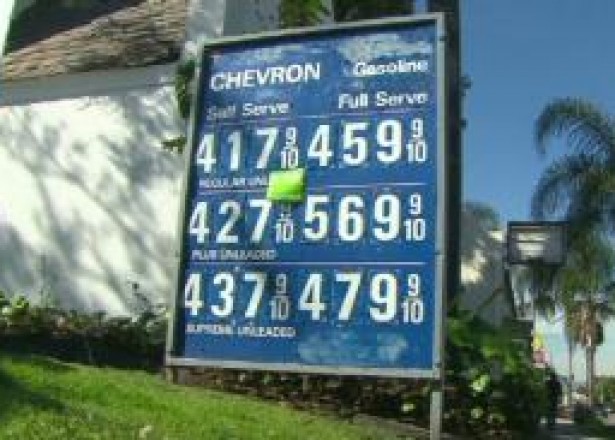 NEW YORK - February has been one heck of a month for American motorists, who have been hit with an 8% spike in the price of gas. And things are expected to get worse during the summer driving season, when gas prices could break their current record.
On Wednesday, the price of unleaded gasoline rose for the 22nd day in a row to a nationwide average of $3.73 per gallon, according to the motorist group AAA.
Gas prices are up about 14% so far in 2012. The average price is down 38 cents, or about 9.3%, from the record high of $4.11 reported on July 17, 2008.
In places like Alaska, California and Hawaii, the price of gas has surpassed $4 a gallon. The rise in gas prices is being fueled by the climbing price of oil and Iran's ongoing threat to shut down the strait of Hormuz. Signs of an improving economy, along with the Dow Jones (INDU) industrial average closing above 13,000 for the first time since May, 2008, have also helped boost oil and gas prices.
And gas could soon go higher. Gus Faucher, senior economist for PNC, projects that gas prices hit a new record of $4.25 a gallon in the summer driving season, which runs between between Memorial Day and Independence Day.
But that's not necessarily a bad thing. High gas prices could be a harbinger of happier times. We had much lower gas prices during the recession," Faucher said. "That's one of the reasons why gas prices have moved higher -- the economy is much stronger. I'd rather have higher gas prices and a stronger economy." Even with the jump in prices, Americans still pay much less than many European nations -- even ones that produce their own fuel. Take the United Kingdom, for example, which produces much of its own oil from the North Sea. U.S. consumers are worried about having to pay $4 for a gallon of unleaded gas. But the Brits are paying double that, according to figures from the International Energy Agency.
Norway also harvests oil from the North Sea, but a gallon of unleaded gas in the capital city of Oslo costs $9.23, according to the Norwegian web site Din Side.
"Gas prices are much higher, and that's because of taxes," Faucher said.

Enseñando a Los Niños a Aceptar A Otros