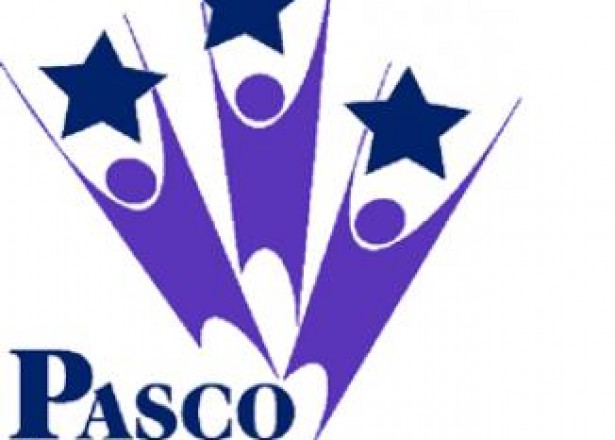 PASCO,WA - Whether building cities of the future or marketing their passenger airplane designs, the students at Ochoa Middle School are getting hands-on STEM (science, technology, engineering, and math) experiences thanks in part to seventh grade teachers Paul Fraser and Chip Elfering. For their outstanding work enhancing STEM education in their school and beyond, Fraser and Elfering were honored with the 2013 Mid-Columbia STEM Educator award on March 25 at STEMconnect, the annual kickoff banquet to this week’s STEMcon event.
“These two teachers have taken the lead in providing STEM access to their students through the Future City Project and have been instrumental in guiding their grade level team through the process of writing an integrated unit for the entire seventh grade,” says Ochoa Principal Jacqueline Ramirez. “I am very appreciative of the dedication, commitment, and hard work they have demonstrated.”
The Mid-Columbia STEM Educator Award recognizes an individual who has made a significant impact on the quality of STEM education in the Mid-Columbia. Together, Fraser and Elfering lead a seventh grade STEM enhancement class. Among other projects, their students competed in Future City, a national program for middle school students to imagine, design, and build progressive cities. Ochoa hosted its first ever regional Future City competition on Jan. 16 with student projects judged by local engineers and environmental scientists.
Fraser and Elfering are two of several teachers on the school’s STEM Site Team, which oversees a variety of STEM opportunities for students and also includes local STEM professionals. “Ochoa is very proud of the work Paul, Chip and members of the STEM Site team have done to further the implementation of the STEM initiative at our school,” adds Ochoa Assistant Principal Kathy Lepore.
Delta High School was also recognized for being one of six schools and one district that were awarded $19,000 grants and serve as STEM mentors to other schools in the state. Known as “Lighthouse” schools, the seven entities were recently awarded the grants to promote and develop STEM education, including technical assistance and advice for other elementary, middle and high schools that are creating their own STEM environments. STEM Lighthouse schools originated in 2010 with the Legislature’s passage of House Bill 2621. The bill directs the Office of Superintendent of Public Instruction to designate as many as three middle and three high schools each year as Lighthouse schools.
For more information contact: Leslee Caul, Director of Public Affairs, 546-2807.