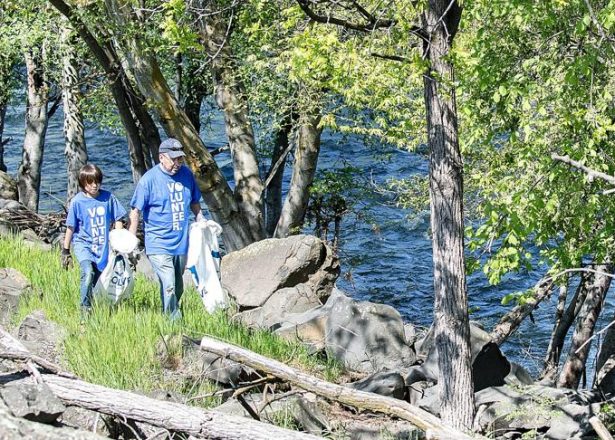 Pendleton,OR -  Thank you to the 102 volunteers — 68 adults and 34 youth — who helped clear more than 1,500 pounds of trash from the River Parkway and the banks of the Umatilla River in Pendleton on May 4!

Special thanks to John Cook, Clifford Smith and Roger Rasico of the Veterans of Foreign Wars Post 922, who staffed the grills for our barbecue lunch after the cleanup.

Special thanks to Umatilla Basin Watershed Council for their ongoing support.

Volunteers found plenty of Polar Pop cups, empty beer bottles, energy drink cans and cigarette butts. Other notable items included a pair of suspenders, a kid’s bike frame, a toilet seat lid, a rice cooker, a bottle of women’s body spray, an unopened can of tomato sauce and the head of a Worf action figure from “Star Trek: The Next Generation.”

The Stewards of the Umatilla River Environment (S.U.R.E.) is an informal volunteer organization that supports the enhancement of the riparian environment along the parkway. We hold river cleanups at least once a year, which are great opportunities to meet new people and spend time along our beautiful river.

If your business or organization would like to sign up for the Adopt-A-Parkway program, to help keep the parkway clean year-round, give Pendleton Parks & Recreation a call at 541-276-8100.

Before the Adopt-A-Parkway program began, S.U.R.E. volunteers — then led by Betty Klepper — would remove over 2,000 pounds of trash from the riverbanks in a single morning.