Black Friday Thursday: Will Shoppers Really Show Up at Stores on Thanksgiving Night? 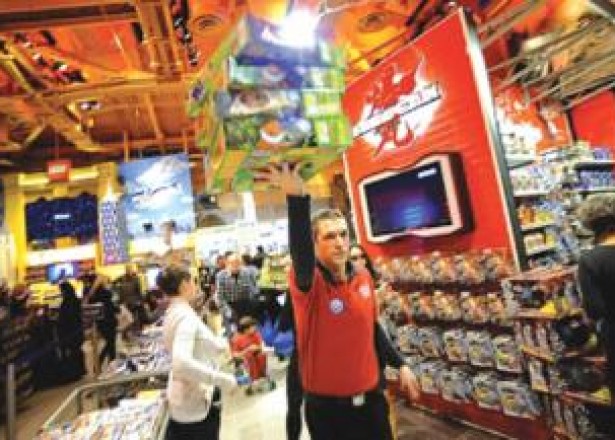 WASHINGTON - One of the biggest stories to emerge this holiday shopping season is the expansion of Black Friday. In years past, retailers pushed the envelope by opening at 4 a.m., or even 3 a.m. the morning (if you want to call it that) after Thanksgiving. That’s just not cutting it this year, when many stores will open their doors to Black Friday shoppers at midnight, or, in the case of Walmart, at 10 p.m. on Thanksgiving night.Toys R Us, which opened at 10 p.m. on Thanksgiving night of last year, decided it was necessary to open an hour earlier, at 9 p.m. on Turkey Day 2011. Most Toys R Us stores will remain open until 11 p.m. on Black Friday, making for a 26-hour shopping marathon.
By some account, there’s a sizable portion of consumers who are put off by the constant expansion of the holiday shopping season, in which Black Friday not only now starts on Thursday, but weeks before at the beginning of November, and in which back-to-school and Christmas shopping occur simultaneously. Store employees aren’t happy about the idea of having to go to work on a national holiday either; an online petition is even circulating to get Target to push its midnight opening back to 5 a.m. the following morning.
What’s with the backlash by consumers and workers against stores being open on a national holiday? Is it a smart move for retailers to start sales so early? Is it necessary? And, considering that there’s an obvious alternative to shopping in stores—shopping at store websites, where nearly all of the same merchandise is available at the same price—is there any point opening on a day many Americans feel is sacred?
The revolt by Target workers has been reported everywhere from CNN to USA Today to the Baltimore Sun. The response from Target is basically that it didn’t want to open on midnight on Thanksgiving night. Instead, the retailer was simply responding to the desires of its customers: Shoppers wanted them to open earlier, and so it obliged. A statement released by Target read: We have heard from our guests that they want to shop Target following their Thanksgiving celebrations rather than only having the option of getting up in the middle of the night. By opening at midnight, we are making it easier than ever to deliver on our guests wants and needs.